The Illogic of Anglican Papalism The most recent pastoral letter issued by the Bishop of London is well worth reading, and brings to mind a statement I first published in 2006, which I amend here:
Anglo-Papalists, who comprised much of the Anglo-Catholic movement in the United Kingdom, were essentially Roman Catholics separated from the Pope of Rome by what they saw as an historical accident, that is, the English Reformation. Anglo-Papalists belonged to the Church of England or her daughter Churches, but believed unreservedly in the Papal Claims and Roman Dogmas. They accepted as dogmatic, de fide, the doctrines of the Immaculate Conception of Our Lady, the Corporeal Assumption of Our Lady, expiation fire-purgatory, indulgences, the treasury of merits of the saints, and other distinctively Latin doctrines. Oddly enough, they also accepted the dogmas issued by the First Vatican Council of 1870, to wit, the immediate, universal, and absolute jurisdiction of the Roman Pontiff, and Papal Infallibility. We Traditional Anglicans, Catholics who believe in the consensus of the First Millennium Church, reject these dogmas as unsubstantiated by Holy Scripture and Apostolic Tradition. Anglo-Papalists were 'Roman Anglicans,' who used the modern Novus Ordo Roman Rite and included the commemoration of the Pope in the Canon of the Mass. They worshipped, prayed, taught and thought as Roman Catholics. The only Romanist theological position with which Anglo-Papalists disagreed was the Papal Bull of Leo XIII, Apostolicae Curae, in which Anglican Orders were declared absolutely null and utterly void. In other words, Anglo-Papalists believed Rome is infallible except in the matter of the validity of Anglican Orders and Sacraments. For this reason, and seemingly this alone, many had not, until recently, 'poped.' As Father Colin Stephenson, sometime Administrator of the Shrine of Our Lady of Walsingham, succinctly put it in one of his classic works, the Anglo-Papal position is, to most Anglicans, wildly illogical. And indeed, I contend it remains wildly illogical to Traditional Anglicans such as ourselves. There is a clear dividing line between Catholics who look to Anglicanism as being a true Catholic Church in her own integrity and tradition, most especially the Anglican Catholics of the Continuing Churches, and those Papalists who see Rome as the true source and centre of the Church and who thus see Anglicanism as an historical interruption of communion with Rome, or worse yet, an historical mistake.
The erection of the Anglican Use Ordinariates in communion with Rome has now changed the situation for a significant number of Anglican Papalists, who have been willing under the new circumstances to accept the papal judgement on Anglican Orders and accede to re-confirmation and re-ordination in the Roman Communion: thus far, 900 laity and 55 clergy have joined the Ordinariate in the UK, with more to follow there and in the United States. For those Anglo-Catholics who choose to remain Anglican, it would seem to be very meet, right and their bounden duty that they should continue, or where needed, restore, the celebration of the liturgy in the Anglican Rite in the various forms in which it has been transmitted to us by our forebears, forms which have been hallowed by generations of faithful use. The choice to remain Anglican should certainly include an acknowledgement of the full catholicity and orthodoxy of the Book of Common Prayer tradition and of those supplemental liturgies approved by ecclesiastical authority which conform to it. May it be humbly submitted that Anglicans should use a recognisably Anglican liturgy.
at November 21, 2011 5 comments:

Courtesy of my brother, Father Brandon Jones, comes this sixth instalment in a video series on the new English translation of the Novus Ordo Missae. Another rich Anglicisation, the bodily gesture which expresses reverence for the truth of the Incarnation during the recitation of the Nicene-Constantinopolitan Creed, is discussed. The practice of bowing or genuflecting during the Incarnatus in the Creed is a widespread and long-held Anglican custom, one which the Anglican Rite has in practice preserved and used since long before the Novus Ordo was introduced. Another happy return to Anglican (and ancient Western) praxis!
at November 19, 2011 No comments:

...And the Word was made Flesh

A happy Advent and Christmas to you all! Christ-Mass is not only a wonderful holiday, a time for family and friends, and a joyful occasion for gift-giving – certainly it is all of these things. More imperatively, it is a theological event, a revelation of God, a life-altering reality we again and again re-live through the Church’s liturgy. The greatest challenge to the twenty-first century Church is not the Reformation polemics of the sixteenth century or the rationalism of the eighteenth century, but the theological controversies of the fourth century. Christology will be the focus of the Church in the next generation. The ancient heresies that deny the Divinity of Our Lord are again in vogue and are finding a fresh expression in the purportedly novel methods of what Father Richard John Neuhaus wittily called ‘the sideline churches.’

Whether we consciously recognise it or not, the struggle for Christians in our contemporary age is to recover and promote the old paths, the Old Time Religion. ‘Stand ye in the ways, and see, and ask for the old paths, where is the good way, and walk therein, and ye shall find rest for your souls’ (Jeremiah 6.16). Orthodox Christians are today challenged firmly to uphold and boldly to proclaim in ancient and yet ever revitalised ways the truth that Jesus Christ, the Babe in Bethlehem’s manger, is not merely a good person, a prophet, or a noble teacher, but the true God made Man. The Feast of Our Lord’s Nativity recapitulates for us each year the central doctrinal truth and mystery of the Christian Faith, the Incarnation of Jesus Christ, the Word made Flesh. Who is born in Bethlehem on Christ-Mass Day? The Baby in the manger is God. ‘God of God, Light of Light, Lo! He abhors not the Virgin’s womb: Very God, Begotten, not created; O come, let us adore him, Christ the Lord’ (Hymnal 1940, Hymn 12).

The Son of God, the pre-existent Logos, Who became incarnate in the flesh as Jesus Christ, is not a creature, not a being created by God the Father before all other created things or beings. The term homoousios, 'of one substance' with the Father, is used by the Church to affirm that Our Lord is truly God. If Jesus Christ is not God, is not of one essence or substance with the Father, and is not a true divine Person sharing the divine life and communion of the Father by nature, then God Himself did not assume human nature in the Incarnation, and thus man has not been redeemed or saved. The Holy Fathers of the Church teach that 'only that which is assumed can be redeemed.' Our Saviour brought about atonement and the salvation of mankind, for He is God, Who assumes all that pertains to human nature, body, mind and soul. Jesus Christ is the Second Person of the Godhead and 'One of the Holy Trinity.' Christmas is the Feast of the revealed dogma of the Trinitarian nature and communion of God, Three Persons in One Essence, one and undivided. The Father is unbegotten, the Son is eternally begotten of the Father alone, and the Holy Ghost eternally proceeds from the Father, and is sent through the Son and rests in the Son. On Christmas, we contemplate the Lord Jesus in His identity and mission: the Word of God, the Logos, Who became Man in the Incarnation is the Most High God.

The New Testament describes Our Lord as monogenes in Greek, 'only-begotten.' This term designates the mysterious and eternal relationship of the Son to the Father within the communion of the Trinity. The Son has for all eternity come out from the Father and derives His eternal existence, His generation, from the Father, the sole Origin, Source and Fountain of the Trinitarian life. The words of the Nicene-Constantinopolitan Creed purposely utilise the language of the New Testament regarding the Person of Our Lord and declare that the Lord Jesus Christ is 'one Lord, the only-begotten Son of God, begotten of His Father before all worlds, God of God, Light of Light, very God of very God, begotten, not made, being of one substance with the Father, by whom all things were made...' From all eternity, the Son derives His eternal being, glory and majesty from the Father’s essence. He is eternally born of the Father, co-equal, co-eternal. Begotten means 'from God forever,' eternal generation from the Father, not a created status.

And what for us is the result of this begetting, the Son eternally begotten of the Father and now begotten in time and in human flesh by the Holy Ghost of the Blessed Virgin? Our own new birth, our begetting by God, our adoption as the children of God by grace. We become by grace what the only-begotten Son is by nature. From Christ’s timeless birth from His Father and His earthly birth of Mary, we are born again in Holy Baptism by Water and the Holy Ghost (Saint John 3.5) unto eternal life. ‘In this was manifested the love of God toward us, because that God sent his only begotten Son into the world, that we might live through him’ (I Saint John 4.9) ‘Whosoever believeth that Jesus is the Christ is born of God: and every one that loveth him that begat loveth him also that is begotten of him’ (I Saint John 5.1).

‘Mild he lays his glory by, Born that man no more may die, Born to raise the sons of earth, Born to give them second birth’ (Hymnal 1940, Hymn 27).

The World Consultation on Continuing Anglican Churches - The Addresses 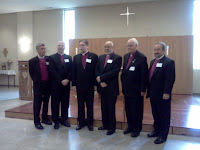 Please follow this link to the keynote address given by Bishop Michael Gill, Diocesan Bishop of the Anglican Church in Southern Africa Traditional Rite, given at the World Consultation on Continuing Anglican Churches in Brockton, Massachusetts on Thursday 3rd November 2011.
at November 06, 2011 3 comments: