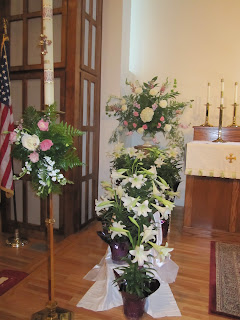 Palm Sunday, 24th March
Sung Holy Communion
and the Blessing and Distribution of Palms,
9am and 11am

A Traditional Anglican response to George Weigel's call... from 2008.

'...He called me to have breakfast with him one morning and told me very clearly that the Ordinariate was quite unnecessary and that the church needs us as Anglicans...' 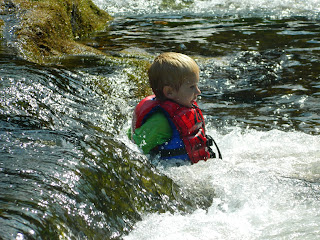 We look forward to many campers joining us this coming June in Ashe County, North Carolina.
at March 12, 2013 No comments:

The First Millennium Church and the Bishop of Rome

Pope Leo IX, Last of the Bishops of Rome in communion with the rest of Christendom.

The Bishop of Rome is historically the first Bishop of the Church, the primate and chief representative of the Church Catholic. These are all positive and endearing characteristics, from which neither Orthodoxy nor Anglicanism has ever formally dissented: the Roman Church deserves our honour and respect, and all due devotion and obedience as guardedly allowed and mandated by the Undivided Church of the First Millennium. We accord to the Bishop of Rome that which the First Millennium Church accorded his office. Saint Ignatius of Antioch, Saint Irenaeus of Lyons and Saint Cyprian of Carthage proclaim that the Bishop of Rome 'presides in love and honour.' Anglicans honour the Roman See as primus inter pares, first amongst equals in the undivided and consentient Catholic episcopate. But there are serious problems with the Roman Communion, impediments and barriers which forestall the possibility of Anglicans entering into the Papal fold. We believe Rome fails the strict litmus test of universality, antiquity and consent, the Canon of Saint Vincent of Lerins, in several key areas of Christian doctrine and practice.The Anglican Tradition does not believe, as Rome does, that the totality and completeness of the whole Catholic Church on earth is contained in and comprehended by the See of Rome. We cannot say, as Rome does, that the Papal Communion is coterminous and coextensive with the One Holy Catholic and Apostolic Church.The Church Catholic is not identified with or synonymous with the Roman Communion in an exclusive sense, and yet this is precisely what Rome claims for herself. According to Rome, those Churches in communion with the Pope are the Church, and uniquely the Church qua Church. We find that proposition an inadmissible and flatly anti-historical claim. The Papal Church also professes that the Bishop of Rome is infallible ex cathedra, from St Peter's Chair, and exercises a ministry of infallible teaching in faith and morals apart from the consensus of the Catholic episcopate. Rome also contends that the Bishop of Rome possesses universal and immediate jurisdiction over every Church and Christian on earth, disregarding the ancient sees and dioceses which have historically constituted Catholic communion. We maintain that papal infallibility ex consensu ecclesiae and papal universal jurisdiction are contrary to Scripture and Apostolic Tradition. We assert that the Pope is not above Tradition and the Ecumenical Councils, and cannot legislate doctrine in opposition to received universal Tradition or the consensus patricum and consensus ecclesiae.

Saint Cyprian of Carthage teaches that the Chair of Peter, the Petrine ministry, is really the Apostolate, the undivided episcopate of the whole Catholic Church: every bishop of the one Church is 'Peter' and shares in the Petrine commission and authority because of episcopal consecration. No one bishop can claim to be the successor of St Peter in an exclusive sense, because it is the episcopate itself, the apostolic college of bishops, which holds the priesthood, authority and consecration of St Peter.

Saint Gregory the Great, a Bishop of Rome, states there is no such thing as a 'supreme bishop' or a 'bishop of bishops' above the episcopal college.

The Bishop of Rome is indeed the Bishop of Rome, no more, no less, a chief representative bishop of the Catholic world. His role is analogous to that exercised by Peter amongst the Twelve. He is a representative voice, a spokesman, a primate, first amongst equals, primus inter pares. He holds the 'primacy of love' proclaimed by St Irenaeus of Lyons, the 'primacy of honour' affirmed by Saint Cyprian. The Pope is a Vicar of Christ, but not in a unique or exclusive sense again, for every bishop, every latter-day Apostle in the episcopal college, is a Vicar of Christ, the sacramental representative of Our Lord in his local particular Church. For his Diocese, every bishop is Peter, every Bishop is the Apostle. And, according to Sacred Tradition, all bishops are equal in sacramental power and jurisdictional canonical authority within their own local Churches. Such has always been the consentient teaching of the orthodox and catholic Church of Christ.

The modern Papal Claims are just that, modern. The dogmas of papal infallibility ex cathedra and the immediate and universal jurisdiction of the Pope were created at the First Vatican Council of 1870. They are neither universally-received nor ancient. They are novelties, innovations added to the Catholic Faith. Rome has the essential Faith of the Catholic Church, but has added to it that which it should not.

From the Encyclical of the Patriarchs of the Eastern Churches to the Pope of Rome, 1895...

No doubt every Christian heart ought to be filled with longing for union of the Churches, and especially the whole Orthodox world ardently longs for the unity of the Churches in the one rule of faith, and on the foundation of the Apostolic doctrine handed down to us through the Fathers, ‘Jesus Christ Himself being the chief corner stone.’ Agreeably, therefore, to this sacred longing, the Orthodox Church is always ready to accept any proposal of union, if only the Bishop of Rome would shake off once for all the whole series of the novelties that have been privily brought in to his Church, and have provoked the sad division of the Churches of the East and West, and would return to the basis of the Seven Holy Ecumenical Councils, which, having been assembled in the Holy Spirit, of representatives of all the holy Churches of God, for the determination of the right teaching of the faith against heretics, have a universal and perpetual supremacy in the Church of Christ.

For the practical realisation of the pious longing for the union of the Churches, a common principle and basis must be settled first of all; and there can be no such safe common principle and basis other than the teaching of the Gospel and of the Seven Holy Ecumenical Councils. Reverting, then, to that teaching which was common to the Churches of the East and of the West until the separation, we ought, with a sincere desire to know the truth, to search what the One, Holy, Catholic and Orthodox Apostolic Church of Christ, being then ‘of the same body,’ throughout the East and West believed, and to hold this fact, entire, and unaltered.

And indeed for the holy purpose of union, the Eastern Orthodox Church is ready heartily to accept all that which both the Eastern and Western Churches unanimously professed before the ninth century, if she has perchance perverted or does not hold it. And if the Westerns prove from the teaching of the holy Fathers and the Ecumenical Councils that the then Orthodox Roman Church, which was throughout the West, even before the ninth century read the Creed with the [filioque] addition, or accepted the doctrine of a purgatorial fire, or sprinkling instead of baptism, or the immaculate conception of the Ever-Virgin, or the temporal power, or the infallibility and absolutism of the Bishop of Rome, we have no more to say. But if, on the contrary, it is plainly demonstrated, as those of the Latins themselves, who love the truth, also acknowledge, that the Eastern Orthodox Church holds fast the anciently transmitted doctrines which were at that time professed in common both in the East and the West, and that the Western Church changed them by innovations, then it is clear, even to children, that the more natural way to union is the return of the Roman Church to the ancient doctrinal and administrative condition of things; for the faith does not change in any way with time or circumstances, but remains the same always and everywhere, for ‘there is one body and one Spirit,’ it is said, ‘even as ye are called in one hope of your calling; one Lord, one faith, one baptism, one God and Father of all, who is above all, and through all, and in you all.'

Having recourse to the Fathers and the Ecumenical Councils of the Church of the first nine centuries, we are fully persuaded that the Bishop of Rome was never considered as the supreme authority and infallible head of the Church, and that every bishop is head and president of his own particular Church, subject only to the synodical ordinances and decisions of the Church Universal as being alone infallible, the Bishop of Rome being in no wise excepted from this rule, as Church history shows. Our Lord Jesus Christ alone is the eternal Prince and immortal Head of the Church, for ‘He is the Head of the body, the Church,' who said also to His disciples and apostles at His ascension into heaven, ‘Lo, I am with you alway, even unto the end of the world.’

Each particular self-governing Church, both in the East and West, was totally independent and self-administered in the time of the Seven Ecumenical Councils. And just as the bishops of the self-governing Churches of the East, so also those of Africa, Spain, Gaul, Germany and Britain managed the affairs of their own Churches, each by their local synods, the Bishop of Rome having no right to interfere, and he himself also was equally subject and obedient to the decrees of synods. But on important questions which needed the sanction of the universal Church an appeal was made to an Ecumenical Council, which alone was and is the supreme tribunal in the universal Church. Such was the ancient constitution of the Church; but the bishops were independent of each other and each entirely free within his own bounds, obeying only the synodical decrees, and they sat as equal one to another in synods. 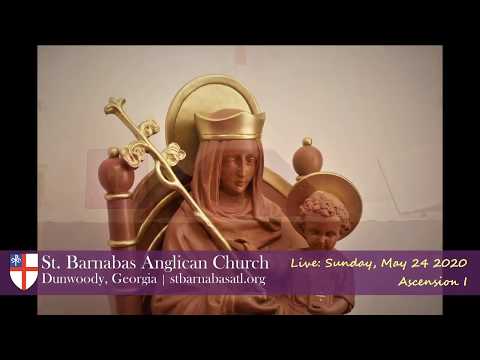