The Consecration of the Very Reverend Owen Rhys Williams to Bishop Suffragan of the Diocese of the Northeast in the Anglican Church of America took place on the Feast of Saint Mark the Evangelist, Thursday, April 25th 2013 at Trinity Anglican Church Pro-Cathedral, Rochester, New Hampshire.

Men's Retreat at the Monastery of Our Lady of the Holy Spirit, Conyers, Georgia - Saturday 20th April

Let us pray for the victims and their families, and the people of Boston:O GOD, merciful and compassionate, who art ever ready to hear the prayers of those who put their trust in thee; Graciously hearken to us who call upon thee, and grant us thy help in this our need; through Jesus Christ our Lord. Amen.Jesus mercy. Mary pray.
at April 15, 2013 No comments: 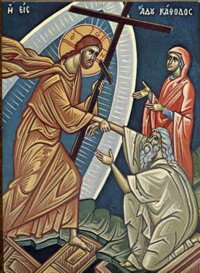 Q: How should Christians use the word 'Alleluia'?

A: The word Alleluia is a Latin form of the Hebrew word Hallelujah, literally meaning 'you all praise Yah (YHWH),' 'you all praise Yahweh,' or as is commonly translated, 'praise the Lord.' It is a proclamation and exclamation of triumph, victory, joy, exultation, and praise and worship of the One True God of Israel, the God and Father of Our Lord Jesus Christ. It is used 28 times in both the Old and New Testaments and is one of the most ancient prayers of praise in the worship of old covenant Israel and in the Christian Church. It addresses God by His sacred Name as revealed to Moses in Exodus chapter 3, Yahweh or Yah, 'I AM.' From the first century AD, it has been used in Christian liturgy and worship, particularly in announcing the reading of the Holy Gospel during the services of the Church or in proclaiming the glory of Christ's Resurrection. It is found in the earliest extant liturgies of Christendom, and has been used consistently by all Christians for two-thousand years.

By custom, the word Alleluia is not said or sung by Christians during Lent, because the word designates the Resurrection and is thus 'buried' during our Lenten discipline to be raised with Christ in His joyful Resurrection on Easter Day, symbolic of Christ's death and our participation in it. On Easter we celebrate by singing Alleluia once again after forty days - for Lent has ended and Our Lord has died and is risen again.

So, it is certainly not a sin to say it prayerfully and reverently - but one could say quite the opposite. It would be a failure of gratitude and adoration of God not to say it, if one wishes to express seriously one's devotion. However, to say Alleluia in jest or joking or mocking or irreverently or as a casual turn of phrase without intending to affirm what it actually says would be a violation of the Third Commandment, that is, in such instances one would be taking the Lord's Name in vain. To say 'Alleluia' flippantly would be the same as to say 'O my G-d' flippantly - it is the same principle because both phrases invoke the Name of God. The question certainly reminds Christians that we are to be careful and reverent in our speech and are always to honour God in the language we use...


The introduction of the institution of female bishops will lead to the elimination of even a theoretical possibility of the Moscow patriarchate recognising the church hierarchy of the Anglican Church... 'We know that the Anglican Church is now going through a difficult time and various views, positions, and parties co-exist in it. However, we really hope that the traditional understanding of Christian morals and the church system will prevail in this polemic... Prevent secular society from forcing on the Church of England the recognition of some forms of cohabitation which have never been considered marriage by Christian churches.'

The time for a reorientation of Anglican-Orthodox dialogue toward the orthodox Continuing Anglican Churches has never been more opportune or more necessary.
at April 01, 2013 2 comments: