Salvation and the Sacraments 2.0

In opposition to error, the Holy Catholic Church believes herself to be the Sacrament of Christ to the world mediating the divine life of the Holy Trinity through the objective covenantal promises of Christ's institution, making available to all men, who receive by faith, the transformative gift of grace. The sacramental principle simply means that Our Lord extends, prolongs and continues His Incarnation through His Mystical Body, the Church. The Church and Sacraments are, in a real sense, Christ Himself at work for the salvation and sanctification of mankind. The Church is the People of God, the Body of Christ, the Temple of the Holy Spirit, the redeemed human race sealed by Baptism and nourished with the Eucharist, the saved human family restored to communion with the Father through the Son in the Holy Ghost. The Church is therefore, because she is herself the great Sacrament of Christ, a visible, sacramental, incarnational supernatural Society with visible characteristics, officers and means of grace.

Apostolic Succession is the Sacrament that guarantees that the Church and Sacraments as instituted by Christ are administered by and through Christ with His personal authority and commission. Only the Apostles and their successors have directly received from Our Lord the authority and power to do and effect what Christ commanded them to do. Apostolic Bishops and Priests are 'ministers of Christ' and 'the stewards of the mysteries of God' (I Corinthians 4.1); they are 'ambassadors for Christ' (II Corinthians 5.20). Through the Sacrament of Holy Orders they minister 'in the person of Christ,' in persona Christi (II Corinthians 2.10). The lack of Apostolic Succession deprives us of sacramental assurance and of the plenitude of the Church as given by our gracious Lord. The Sacraments are the covenants of grace which assure and guarantee what they promise; they effect what they symbolise and symbolise what they effect - being efficacious or effective signs of grace. But the Sacraments can only serve to be objective means of grace if they are administered according to Christ's appointment.

The key to unlocking the problem is Holy Tradition: non-Catholics interpret the Bible according to their own theological and speculative matrix. Their hermeneutical interpretation of Scripture completely rejects and displaces the magisterium of the Catholic Church as located in primitive Tradition. They oppose by their own devices the teaching of the Holy Fathers, the Seven Ecumenical Councils and the Tradition of the Undivided Church. Holy Tradition is revealed by God in the Church for the right interpretation of the Scriptural record: II Thessalonians 2.15.

Catholic orthodoxy is clearly not in a process of 'reception' concerning the ordination of women and is certainly unprepared to admit that the Church has erred or has been wrong or misguided about something as important to the Gospel and Catholic Faith as the sacramental essence of the Catholic Church and her Apostolic Ministry instituted by Jesus Christ. For catholic Anglicans, as for the Patriarchates of East and West, the maleness of Holy Orders is a settled issue because it is a dogmatic truth revealed by God in Scripture and Tradition. Women's ordination, for this reason, has historically been a church-dividing issue and is not a second-tier concern or problem.

The Catholic priesthood, which extends in space and time and under a sacramental form the very Eternal Heavenly High Priesthood and Intercession of Jesus Christ, is the appointed means of salvation given by Our Lord to the Apostles and His Church; it is at the heart of the Gospel - because by the sacramental priesthood Our Lord applies and appropriates to His members the graces won for us by His Incarnation, Life, Death and Glorification. The Bible and the Church tell us plainly that Jesus freely chooses to minister His gift of salvation to us through the hands of unworthy human priests. '[He] sent abroad into the world his Apostles, Prophets, Evangelists, Doctors, and Pastors... For these so great benefits of thy eternal goodness, and for that thou hast vouchsafed to call these thy servants here present to the same Office and Ministry, appointed for the salvation of mankind...' (The Anglican Ordinal).

The priest is the Sacramental Man, or as Father Austin Ferrar describes it, 'a walking sacrament.' Such is the wondrous love of God, who condescends to save us incarnationally, by human means and human instruments. Because of the Word's Incarnation and the priesthood, the Man Jesus Christ saves men as men. We do not have to become something else to become one with God - God redeems and divinises us in our human nature, a nature He shares with us in the Priestly Person of Jesus Christ, God and Man, Mediator and Advocate, Offerer and Victim. It is the ordained Catholic priest, the living icon of Christ, the living instrument of Christ, who is purposely used by Jesus to link Himself, the God-Man, with the members of His Body in supernatural communion. The sacraments achieve this mystery. This is not because of any man's worthiness or any usurpation of the divine prerogative, but because of God's plan of salvation and the divine economy, revealed to us in Scripture and Tradition, through which the merciful Father reconciles us to Himself through the Son in the Holy Spirit. The priesthood is a central part of God's plan for man.

The salvific sacraments depend, for their efficacy, upon a valid priesthood which confers them with the power and promise of Christ. Here grace and faith meet in divine gift and exchange. The priesthood is the loving provision of God, His own seal of promise, His guaranteed assurance of His grace given to those incorporated into the life of the Blessed Trinity. Such is the gift of apostolicity in the Church. All we must do is keep our end of the covenant, and maintain what God has deliberately and freely bequeathed to us.

The male character of Holy Orders is, as much as homosexual practice, a 'salvation issue.' The raison d'etre of the Continuing Church is nothing more or less than the perpetuation of the divine life of the Mystical Body of Christ, Holy Church, and this perpetuation entails by necessity the preservation and transmission of the Catholic sacramental priesthood, which is utterly essential, integral to the existence of the Mystical Body of Christ received from our Head and Lord.

The three most pertinent Scriptural references in regard to the grace and salvific necessity of the Sacraments and the authority given by Christ to the Apostles to administer them would be the ones that speak directly to the Dominical Sacraments of the Gospel and the Apostolic Succession.

2. S John 6.50-58 and the Institution Narratives of SS. Matthew, Mark, Luke and S. Paul on I Corinthians 11.23-32 - the Holy Eucharist is generally necessary to salvation for all men.

3. S. John 20.19-23 - the power of Apostolic Succession, sacramental authority, is bestowed on the Apostles by the Risen Lord.

Salvation is sacramental, as Our Lord declares.
at September 20, 2007 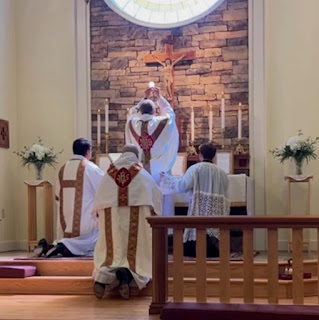