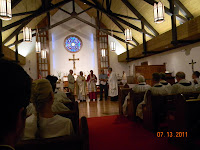 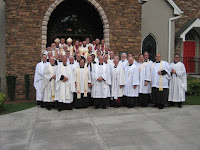 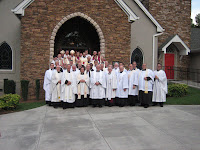 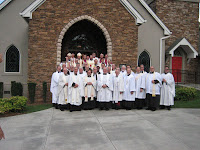 In part, the resolution stated “That this preliminary document will serve as a catalyst for the eventual reconciliation of our two jurisdictions, that it will encourage other continuing jurisdictions to seek greater unity and that it will bring to fruition the unity of purpose that God clearly intends for his people.” Each church body will recognize the catholicity and independence of each other, will welcome members of each other’s bodies to receive the Sacraments, and will recognize the validity of each others’ holy orders. The resolution also states that both church bodies will work toward a closer bond between the two jurisdictions. The resolution clearly stated that “possessing a common heritage and in recognition of our spiritual kinship, we acknowledge that we are members of the One Holy Catholic and Apostolic Church.”

The Anglican Church in America along with the Anglican Province of America are two of the largest traditional Anglican Church bodies in the United States. Both seek to uphold the Catholic Faith, Apostolic Order, Orthodox Worship and Evangelical Witness of the Anglican tradition within the One, Holy, Catholic and Apostolic Church of Jesus Christ. The Communion holds Holy Scripture and the ancient Creeds of the Undivided Church as authentic and authoritative, and worships according to the traditional formularies of the Church. The Eastern and Western Churches split in 1054 and the Anglican Church, which existed in the British Isles since the first century, joined with Rome in 664 and later separated from the Roman Catholic Church in the 16th Century.

In a statement issued by the President of the House of Bishops, the Rt. Rev. Brian Marsh said "The APA action reaffirmed what we have known in both bodies for a number of years, that in Christ and in each other, we are one Church, one body. I applaud Bishop Grundorf and the Synod of the APA for their actions to to which I am sure we will respond in kind in September."

Today, 15th July 2011, witnessed the conclusion of the Seventh Provincial Synod of the Anglican Province of America, held in Dunwoody, Georgia and sponsored by Saint Barnabas Church. A magnificent affair, the Synod welcomed what may be a record number of delegates, observers and friends from throughout the United States and across the globe. We were particularly honoured to welcome the three Diocesan Bishops of the Anglican Church in America (ACA), the Right Reverends Brian Marsh, Stephen Strawn and Daren Williams, the Vicar General of the ACA Eastern Diocese, Father John Vaughan, and the Archbishop of the Anglican Church in the Philippines, the Most Reverend Frederick Belmonte.
At this morning's session, the Province endorsed a formal intercommunion agreement with the Anglican Church in America, which agreement will be considered for final approval by the General Synod of the ACA in September 2011. Previously, all three Dioceses of the Anglican Province of America, the Diocese of the Eastern United States, the Diocese of Mid-America and the Diocese of the West each endorsed the same intercommunion agreement separately. The four ACA Dioceses have also already individually endorsed the agreement. From this humble beginning, this first crucial step, this gesture of charity and reconciliation, we pray that the reunion of the entire Continuing Church will begin in earnest.
The APA again made history today by presenting a cheque in the amount of $100,000 to Operation Mobilisation for the building of a Dalit educational centre in India, a vital Christian English-language school that will have the potential socially, intellectually and spiritually to liberate hundreds if not thousands of children who otherwise would possess no hope or opportunity for the future. Through intense commitment and sacrifice, our parishes and missions raised the money for the school. Our global outreach and missions have entered a new and exciting phase. Over $5,000 was raised for the Philippine Church's theological training centre at the Synod.
Many fantastic volunteers, over fifty-five in number, made the glorious occasion of Synod possible: our heartfelt thanks go to all those who so graciously and selflessly served to make this year's Provincial Synod a truly wonderful and momentous event.
Let us continue to pray for the unity of the Anglican expression of the Holy Catholic Church of Christ and for the advancement of the Gospel of Our Blessed Lord!
at July 15, 2011 No comments:

The Reverend Father Conrad Lewis Kimbrough was born 10th May 1924 and entered eternal life on Tuesday 5th July 2011.
A dearly beloved friend, priest, pastor, mentor and embodiment of all that is good, gracious, beautiful and true in orthodox Anglicanism, a son of Nashotah House and a faithful servant of the Lord in the Anglican Communion for thirty-two years.
Rest eternal, grant unto him, O Lord, and let light perpetual shine upon him: may his priestly soul, and the souls of all the faithful departed, through the mercy of God, rest in peace. Amen.
at July 07, 2011 1 comment:

Courtesy once again of my brother, Father Brandon Jones, comes this fourth video on the new English translation of the Novus Ordo Missae. The notable re-Anglicisation of the Nicene-Constantinopolitan Creed to the liturgical first-person singular form, 'I believe,' marks yet another area in which the new translation conforms to the age-old Anglican Rite.
at July 01, 2011 1 comment: