This linked recording is the 27th November 1960 film clip that shows Bishop Robert Herbert Mize being consecrated by Archbishop Joost de Blank of Cape Town as Bishop of Damaraland. Bishop Mize would serve as co-consecrator for Bishop Walter Grundorf on 3rd October 1991, who in turn would serve as my chief consecrator on 18th September 2010... APA history in the making.
at November 28, 2019 No comments:


O MOST merciful Father, who hast blessed the labours of the husbandman in the returns of the fruits of the earth; We give thee humble and hearty thanks for this thy bounty; beseeching thee to continue thy loving-kindness to us, that our land may still yield her increase, to thy glory and our comfort; through Jesus Christ our Lord. Amen.

SAINT BARNABAS DUNWOODY: Holy Mass will be celebrated on Thanksgiving Day, Thursday 28th November, at 10am!
at November 27, 2019 No comments:

ORA PRO NOBIS 2: A Defence from Scripture and Tradition

Apostolic Succession: Photographs of the episcopal consecration of Bishop Charles Francis Boynton as Coadjutor of Puerto Rico on 2nd January 1944. Bishop Boynton would serve as a co-consecrator for Bishop Grundorf of the Eastern United States on 3rd October 1991. Bishop Grundorf would serve as my chief consecrator on 18th September 2010. Splendid pictures! On this Feast of All Anglican Saints, we are reminded that the Apostolic Succession and Tradition live on in the Continuing Church. 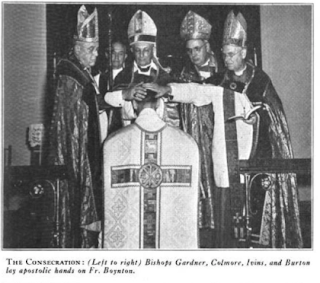 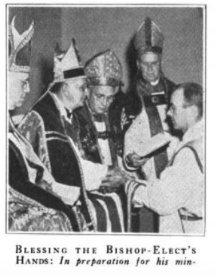 The Bestowal of the American Episcopate 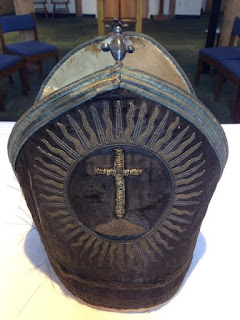 For Anglicans in the United States, the month of November provides a commemoration of unique importance which reinforces what we celebrate on All Saints' Day and All Souls' Day, the great celebrations of the Church Triumphant in Heaven and the Church Expectant in Paradise. During this time, we remember our link with the historic Catholic Church of the ages and the Communion of Saints, and our Apostolic lineage in Holy Order and orthodox worship, forged by the consecration of Bishop Samuel Seabury. On 14th November 1784, the Church in the USA received its first bishop from the Non-Juring Scottish Church, at that time the small persecuted remnant of faithful Anglicans in Scotland. Bishop Seabury was consecrated for the American Church as Bishop of Connecticut by Bishops Robert Kilgour, Bishop of Aberdeen and Primus of Scotland, Arthur Petrie, Bishop of Ross and Moray, and John Skinner, Coadjutor of Aberdeen, in Longacre near what is today Saint Andrew's Cathedral, Aberdeen.

Bishop Seabury also introduced the Scottish Eucharistic Liturgy into the American version of the Book of Common Prayer. The Scottish Mass developed along the lines of the 1549 English Mass, with a renewed emphasis on the Real Objective Presence, the Eucharistic Sacrifice, and the role of the Holy Ghost in the Eucharistic Consecration, in iterations of 1637, 1718, and 1764, ultimately incorporated into the 1789 American Prayer Book. Hence, the Apostolic Succession of the American Church and her Liturgy are splendidly Scottish in origin!

To this very day, the Continuing Church in America uninterruptedly maintains the episcopal succession received from Bishop Seabury and the Eucharistic Rite of the Scottish Church now enshrined the 1928 Prayer Book. Let us render unto Almighty God our thanks and praise for the inestimable gifts provided for our Church in His mercy and providence.

A wonderful meditation from the Anglican Breviary...

The English Colonists who settled in Virginia brought with them priests to minister in the new land, and from this beginning the ministrations of the Anglican Church spread somewhat throughout all the original thirteen colonies. But the Revolutionary War drove many of the faithful and their priests from the said Colonies, and caused the Church to be hated because of its connection with the English Crown, and its buildings and estates to be confiscated or stolen. In which time of need there was no bishop to shepherd the scattered flock, because no diocesan organisation had been set up in the new land; and the bestowal of the episcopate thereto seemed more unlikely than ever before, since it involved an oath of allegiance to the British Crown which no American could take.

But, lest the Church become extinct through loss of Catholic order, in Connecticut ten priests, out of the fourteen who still remained after the war, gathered secretly at Woodbury on Lady Day 1783, and took counsel as to the election and consecration of a bishop. Which same, they determined, must needs be not only a man of godliness and learning, but ready to suffer humiliations in England and persecutions on his return home. And the choice fell on Samuel Seabury, priest of the Society for the Propagation of the Gospel, and a man of strong conviction as to Catholic order.

Some sixty years before this, namely, in 1722, the Puritan Colony of Connecticut had been unbelievably stirred up by an event of great import. For it was then that the Rector of Yale College, the chief seat of learning in that Colony, and other Puritan ministers, in the presence of George Pigot, priest of the Society for the Propagation of the Gospel, whose presence had been procured to represent the Church, did publicly, according to the latter's report to his superiors of that venerable Society, declare themselves in this wise, namely, that they no longer could keep out of the Communion of the Catholic Church. These men, after they had been ordained Anglican priests in England, returned to foster the Church in New England, and their self-sacrifice and courage was blessed with many converts.

Of these was one Samuel Seabury, father of the aforesaid Samuel Seabury who was elected in 1783, by priests brought up in this great tradition, to be the first bishop of the American Church. The same, when he finally arrived in England, found many difficulties. For one thing, an Act of Parliament was required to dispense with the oath to the Crown; but at last, after twelve months of waiting, there was introduced into Parliament an Act to empower the Archbishops of Canterbury and York to consecrate as bishops persons being subjects or citizens of countries out of his Majesty's Dominions. Later, when this act was finally passed, it led to the extension of the English Church throughout the world.

Meanwhile the poverty of resources, and the prospect of interminable delay, moved the Bishop-Elect of Connecticut to seek consecration at the hands of the Catholic remainder of the Church of Scotland (as certain of the faithful there called themselves), for this course had been previously agreed upon in case his consecration was blocked in England. In Aberdeen, therefore, on November 14th 1784, he was consecrated by the Primus, Robert Kilgour, Bishop of Aberdeen, assisted by two other bishops, in the sight alone, as they said, of those known to be supporters of the old and persecuted Faith. With them he signed a Concordat, the tenor of which was: that they would maintain the Common Faith once delivered to the Saints, and they believed the Church to be the Mystical Body of Christ; and that they held the Eucharist to be the principal Bond of Union among Christians, as well as the most solemn Act of Worship, for which reason there should be as little variance in this matter as possible.

And hence the newly consecrated bishop was asked to endeavour to have the Rite of the Scottish Church used as the basis of the new American liturgy. On his return to America he suffered many trials, but from his example the clergy of the Middle and Southern States took courage, and in 1786 sent two of their number, William White, Bishop-Elect of Pennsylvania, and Samuel Provoost, Bishop-Elect of New York, to be consecrated under the new Act of Parliament. In the Convention of 1789, Bishop Seabury united with them to authorise the general ecclesiastical constitution of the American Church; and after the Archbishop of Canterbury had consecrated a third bishop, James Madison of Virginia, he joined with these three other bishops in the consecration of John Claggett as Bishop of Maryland. Thus by the bestowal of the episcopate on Samuel Seabury was finally founded the Church in the United States of America.