The Anglican Joint Synods Churches (G4) are the heirs of this great Congress, held a century ago this month...
And a must read for every Anglican... 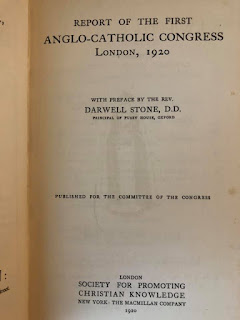 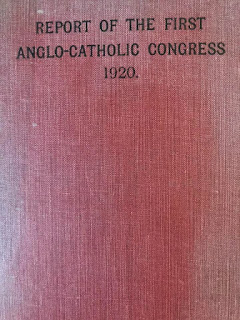 My dearly beloved friends, Praised be Jesus Christ! I pray all of you remain well, safe, and healthy. I love you, am praying for you daily, and am missing those of you who have not yet returned to Church! It is a joy and delight to see week by week those who have now already returned. Please remember I am only a phone call or email away should one need any pastoral care and support, 404.313.9448 and bspchj@gmail.com. I intensely look forward to seeing you in person again soon. Saint Barnabas Church will enter our Phase Three restoration on Sunday 26th July, with two additional features. 1. One cantor, liturgical music, and incense will be restored to the 11am Mass. 2. An outdoor coffee hour with pre-packaged goodies will be provided after each Eucharist. A cantor will now provide liturgical singing during the 11am Mass, to which also the sung minor propers, an offertory anthem, and incense will be restored. Our outdoor Sunday coffee hour with pre-packaged drinks and snacks, and a safely-prepared and served coffee carafe, will take place after both the 9am and 11am services in the plaza in the front of the Church complex. Please be well assured that attending Saint Barnabas is no more risky now than going to the grocery store, the service station, or one's favourite restaurant. Masks and social distancing are still required indoors, just to keep everyone as safe as possible. The same applies to our ongoing Holy Communion protocol of one kind in the hand only. These measures are continued in order to provide an additional level of safety. There is no time like the present in which to return to Church every Sunday. Please do not forget to talk to your friends and neighbours about visiting Saint Barnabas. And please continue to reach out and connect with each other. Ours is a time of personal crisis, frustration, and change for many people, which means we have a ripe opportunity to approach colleagues and acquaintances about trying something new. Be bold! You will surely be surprised by the positive reactions. The doors of Saint Barnabas Church are open wide to welcome everyone. Each one of you abides continually in my love, my prayers, my heart. Thank you so very much and God bless you! +Chad
at July 14, 2020 No comments:

This article will surely make the rounds on social media.
Some minutiae of orthodox theology for just a moment, please. While a Baptism celebrated by two separate ministers, during which one administers the water while another simultaneously utters the sacramental formula, is definitely invalid, the mode of Baptism generally employed by Baptists and other evangelical Christians is valid. The separation of matter and form by mere seconds, as the minister first pronounces the sacramental form and then immediately applies the matter by full immersion, is not enough of a separation to vitiate the sacrament. There is in that case a moral unity of the rite, a single act in two phases in immediate succession. The integrity of the sacrament is preserved, as matter and form are joined in the singular sacramental action. Additionally, the evangelical candidate already submerged in water has a copious amount of water, the matter, applied to the most of the body during the actual invocation of the sacramental form. That in itself would suffice for validity. Just say no to scrupulosity! 'In Baptism, Confirmation, Extreme Unction, and Order, theoretically speaking, a moral union suffices for validity, which exists when the matter is applied immediately before the form is pronounced, or immediately after... yet there can be no doubt about the power of the sacrament if the form is begun before the application of the matter is completed, or vice versa.' Saint Thomas Aquinas, quoted in Tanquerey, Synopsis of Dogmatic Theology.
One also highly recommends this article on the subject as well.
at July 13, 2020 No comments:

On the Tracts for the Times

The global coronavirus pandemic, COVID-19, continues to produce a severe impact on our lives, our Churches, our clergy, our faithful, our families, and our Dioceses and Province. We have just received news that the hotel chosen to host our 2020 Diocesan and Provincial Synods is canceling our meetings, a decision based on recent directives from the government of North Carolina. It has been determined that All Saints’ Church, Mills River, will not be able to accommodate the 80 or more people who planned to attend Synod at its facilities; it is no longer possible for All Saints’ parish to comply with the imposed restrictions, social distancing, and additional directives from the Governor of North Carolina.

Given the extreme circumstances in which we are placed by the pandemic, we have made the difficult but necessary decision to postpone the Diocese of the Eastern United States (DEUS) 2020 Synod in addition to the previously announced postponement of the Provincial Synod and alternatives for the DMA and DOW Synods. We now plan instead to meet in 2021 in Atlanta, Georgia. The next Synods will be sponsored by Saint Barnabas Church, Dunwoody, Georgia. If the pandemic situation improves, and alternative plans can be safely put in place for our clergy, our lay delegates, and our families, we shall consider a date earlier than the summer of 2021 for the rescheduling of the Synods. We have considered other options for our 2020 meetings, and have subsequently decided that there is, at this time, no other practicable solution.

The hotel has canceled all reservations under our group, so there is no need to call and cancel your reservation. Registration fees for the Synods will be refunded to you – information on that process is forthcoming.

In order to plan for the coming year’s DEUS Diocesan budget, we will be sending out an email notice in the next 2 weeks to the DEUS churches regarding the process for our parishes and missions to submit their financial pledges. We are working on a method that will be as effective and convenient as possible.

The DEUS Board of Examining Chaplains (BEC) will conduct its business, examinations, and interviews by Zoom on the same dates as originally scheduled, Monday, August 3, and Tuesday, August 4. All those to be examined or interviewed will receive information about connecting with the BEC (and SC if applicable) via Zoom at the times already scheduled. Zoom details will be shared with those participants in the near future.

We offer our profound thanks and gratitude to Archdeacon Erich Zwingert and the entire congregation of All Saints’ Church, Mills River, for their hard work and dedication in preparing for this year’s Synods. We look forward to another Synod hosted by All Saints’ Church in the future.

Let us all continue to pray for our beloved Church, for our faithful, and our nation and world.