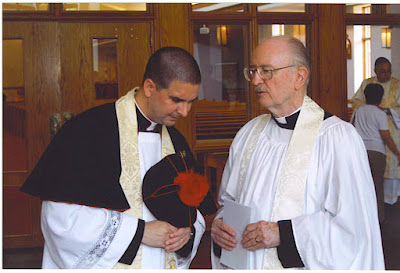 Here is a picture of me with 'The Reverend Father-in-Law,' Father Richard Baskwill, my wife Megan's dad. Ordained by Bishop Grundorf to the Sacred Priesthood in 2003, Father Dic served until his retirement as Curate of Saint Alban's Church, Joppa, Maryland, where I served as Rector from 2001 to 2003 before moving to serve as Sub-Dean of Saint Alban's Anglican Cathedral, Oviedo, Florida. Today, of course, I joyfully serve as Curate of Saint Barnabas' Anglican Church, Dunwoody, Georgia, affectionately known as the 'Atlantican!'
at September 27, 2008