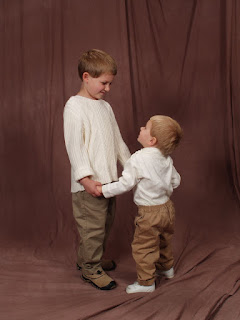 A photograph of my two sons, Aidan and Owain, and a lovely discovery - the sermon preached by the late Archbishop John T. Cahoon Junior of the Anglican Catholic Church at our Solemn High Nuptial Mass is still located on the website for the Diocese of the Mid-Atlantic States...

Jones-Baskwill Wedding, May 13, 2000
Archbishop Cahoon delivered this message at the wedding of Fr. Chad Jones and Megan Baskwill.
The Prayer Book's service for Holy Matrimony preaches the most effective sermon possible on the subject. God and Jesus and St. Paul all agree, for various reasons, that Christian marriage is a good thing. As a result, following the Prayer Book, each member of the couple makes promises to God and to each other which concern his moral will.
They are promises he cannot possibly keep on his own. So by blessing the marriage God says, "As long as you have the will to keep these promises, I will give you the grace and the help you need to do it."
Today's wedding points out a custom which the Church of England and her lineal descendents share which is unlike the custom of any other Catholic church on earth. That is the custom that her clergy may marry. In the Roman Communion priests are not to marry, but married men can in some cases serve as priests. In Eastern Orthodoxy a married man may be ordained priest, but no priest may get married.
Our church's rule is that, since Holy Scripture in no way forbids it, the clergy are permitted to apply to themselves the same standards which St. Paul lays out for all Christians in his First Epistle to the Corinthians. St. Paul says some people are called to be married, and some people are called not to be married. Each state of life is a gift which carries its own advantages and disadvantages.
God doesn't think that either of the states is superior to the other. He leaves it to you and the Holy Ghost to figure out which gift you have and then act accordingly.
Father Jones stood before me when I made him a deacon and ordained him a priest, and he promised that his home and his family would be wholesome examples and patterns to the flock of Christ. Today he and Megan are taking a momentous new step in that direction.
Article of Religion XXXII, titled "Of the Marriage of Priests," says that it is lawful for the clergy as it is "for all other Christian men, to marry at their own discretion, as they shall judge the same to serve better to godliness."
Let us pray that the marriage begun here today will indeed serve Megan and Father Chad better to their own personal godliness, and that it will always stand as a wholesome example and pattern to us.
at January 23, 2009