The Anglican Province of America and the Common Cause Partnership

To all Clergy of the APA and others,

RE: Common Cause Partnership


Over this past year, there has been much talk and discussion and unfortunately argument over the Anglican Province of America participating as a full member of the Common Cause Partnership (CCP). As the Presiding Bishop, I have listened to our bishops, clergy and lay people about their feelings toward how we of the APA should be related to this Body. I have personally gone back and forth attempting to determine where we should be in the midst of the developing Partnership.

As I observe the reaction of the various clergy, there are those who strongly oppose any participation at all, a larger number that believe we should observe and see what develops (an option we may not officially have) and others who believe we should become members and see what happens. At the present time we are polarized at about 50/50. There is no clear majority on any side.


At this point, as Presiding Bishop, I must ask myself the question, is it wise and is it the best course of action to force through a decision to join the CCP with the strong possibility that there will be significant fall out among some of our parishes and missions. As a Church, we have developed a solid reputation as a stable jurisdiction that is outgoing and welcoming. We have managed to attract good and faithful men for the ministry in a Classical Anglican Church that has a balanced approach to the faith. When we have concentrated our efforts upon building up our parishes and dioceses, we have been successful.

At this time, when the majority membership of the CCP has just recently departed from the Episcopal Church and are going through the withdrawal and anger symptoms which so many of our people experienced 30-40 years ago, do we want to be caught up into their present day battles? Many of the membership of CCP are involved in bitter law suits most of which will not be resolved for years to come. We must ask ourselves whether or not we want to get caught up in the internecine struggles of those who are leaving or preparing to leave the Episcopal Church. The APA has always maintained a positive approach to the mission of the church and departed the Episcopal Church years ago without buildings and property and began on a very modest level building new buildings or renovating places for worship. We made a special effort over the years of not looking back but forward as we have sought to build a positive expression of traditional Anglicanism and not being an anti-Episcopal Church. Our reputation as a positive witness has gotten the attention of a number of former Charismatic Episcopal Church bishops and clergy recently and they have invited me to come to their next meeting to talk about their possible future with us.


Although we have developed a solid reputation and have experienced growth, we are still a fragile flock. There are some monumental issues that must be resolved by the CCP for us to give our enthusiastic support and not jeopardize our own future. What will the CCP develop in to over the next few years? What will the leadership be?

At the present time, we are part of an Intercommunion Agreement with the REC and through this relationship we have formed ourselves into a Federation of the Anglican Churches in the Americas. There are now 6 jurisdictions that are part of this Federation. FACA has requested as a Body to be a part of the CCP. We are thereby in a position as part of this Federation to be observers of CCP as we watch how it unfolds over the next few years. Although personally I would like to be at the table of the CCP, I am well aware that I do not have the necessary support of the majority of the APA to be there. The Theological Statement and the Articles of Federation of CCP have my personal support, but I realize my first responsibility as Presiding Bishop and Diocesan Bishop of the DEUS is to care for that to which I was elected and consecrated.


My position is that I do not recommend becoming partners in the CCP at this time and that we wait, watch and pray that as CCP develops and unfolds, we will have clearer direction as to whether we can be a part of it.

I am well aware that my decisions will not meet with everyone’s approval. I have prayed, sought advice from a number of sources and believe that this is the right thing to do for the good of the APA. I pray that all of you will continue to pray for me and for each other as we seek to build this small portion of the Church to His Glory.

My own personal reflections on the CCP:

The Common Cause Partnership has been a divisive proposition for members of our Diocese, and many people in the APA are deeply concerned that by uniting ourselves to the CCP we shall jeopardise our Catholic theological and doctrinal substance, particularly regarding the validity and orthodoxy of the Sacrament of Holy Orders, as the only two prospective members which do not ordain women are the REC and ourselves. In a recent poll taken by the Diocesan office, it was learned that half of those incumbents, rectors and vicars, who responded are opposed to full membership in the Partnership. I have from the beginning taken a more cautiously optimistic 'wait and see' posture regarding the CCP: I certainly approve of observer status, but not full participation, primarily for the reason outlined above. In truth I believe that the CCP and the Anglican Communion alike are so very unstable at the moment that it would be imprudent and unwise to join forces with a body that is not at all agreed on the basic dogmas of the Catholic and Apostolic Church. My prediction is that CCP will eventually fragment and split along theological and leadership lines, for we see the fractures already beginning to emerge. We would be in a very difficult position if we then had to turn round and decide to join one of the factions splintering from the original organisation. I firmly believe we should wait five years before making any formal or permanent commitments to a body which has so little inner order, proven by the recent proliferation of African-ordained bishops, or essential theological unanimity, demonstrated by lack of consensus on the nature of the priesthood.

I have adopted the position stated by Blessed Evelyn Underhill, an Anglo-Catholic who was faced with an increasingly modernised Church of England, that we must accept where we are as God's will and seek reform and transformation from within. Let us work for 'Catholic progress' in that Church or jurisdiction in which it has pleased God to place us. I am deeply grateful to Bishop Grundorf for the honesty and humility with which he has graciously dealt with the question of membership in the Common Cause Partnership: we are extremely blessed to have him as our Bishop, for he is a faithful shepherd, and he has, in my opinion, truly exercised the wisdom of Solomon on this matter! The APA, through its official committees, agrees with my personal long-held position and will only observe the formation of CCP for the time being. It remains to be seen if we could ever join it, and I believe that such a step would be exceedingly difficult for us to achieve, given the profound ecclesiological and sacramentological differences we have the majority of those neo-evangelicals who comprise it. But we shall see. Let us wait upon the Lord and trust in Him.
at January 14, 2008

Amen, amen, and amen. Bishop Grundorf is a man of deep wisdom, pastoral sensitivity, and godliness. Let us continue to lift him up in prayer and thank the Lord for his leadership and witness.

You've pointed out the elephant in the sacristy: the ordination of women. This issue will make shipwreck of any and all effort to cobble together a non-Episcopalian pan-Anglican reality in North America, and no one on either side of the fight wants to acknowledge in public in the vain hope that the issue will simply go away. But it will not go away, and what has to be faced is this: ordaining women (even to the diaconate, certainly to the priesthood, and especially to the episcopate) renders any Christian communion into a Gnostic sect. Once that move is made, blessing sodomy as a sacrament is inevitable, and any Anglican who pretends that this isn't so will in due course find himself in another sinking boat like the Episcopal Church, no matter what protestations to the contrary are made.

I too am happy that the APA will remain an observer in the CCP. I do not see how the members will be able to resolve the women's ordination issue so as not to violate anyone's conscience. It seems unlikely that the majority of the partners who believe that women can be ordained will be convinced of their error, and I pray that those who do not so believe will not be moved from their position.

As Fr. Newman has pointed out, if you argue that tradition is in error or irrevelant when it contradicts your position, you can no longer appeal to it when it supports you.

Having women as ordained clergy is one of the principal reasons there are Continuing Anglican Church jurisdictions, not just homosexuals in the clergy, the 1979 Book of "Heretical" Prayer or Bishops who openly deny the Virgin Birth.

The member groups of the CCP who do have women as ordained clergy would do well to rid themselves of this ill-conceived practice, even if it means saying to those women who currently serve in the capacity of clergy "Sorry, you have to go".

It's not un-Christian to handle it this way. It would be completely in line with the way other heresies were handled by the Church in centuries gone by.

Thank you for your excellent responses and thoughts. As you can tell from my most recent post, Holy Orders alone are not the only obstacle to full communicatio in sacris with the churches and bodies that comprise the CCP. Everything from the doctrine of the salvific necessity of Baptism to Marriage discipline differs bewteen ourselves and our well-meaning friends on the neo-evangelical side. But the Sacramental Priesthood is the central question round which all else revolves, and if a church gets Priesthood wrong, it gets the Gospel, and all its other revealed truths in the Christian Tradition, wrong. God bless you and thank you for reading! 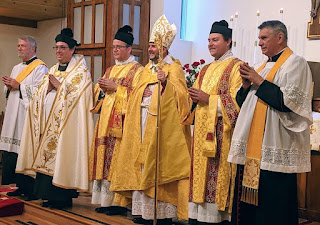