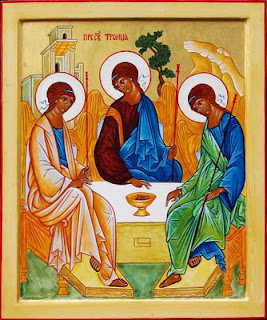 The mysterious manifestations of the Logos found throughout the Old Testament are real manifestations of Christ, Christophanies. In all of these phenomena, in which the Second Person of the Blessed Trinity, God the Word, God the Son appears to the faithful or is active in creation, the pre-existent Logos is pre-incarnate, revealed in mystic forms and apparitions and signs before He assumes flesh of the Blessed Virgin and is made true Man. We see the Divine Logos in Genesis 1 and 2 in the Creation of the world, in the Garden of Eden in Genesis 2 and 3, as Melchizedek in Genesis 14, at the oaks of Mamre with Abraham and Sarah in Genesis 18, in the Burning Bush before Moses in Exodus 3, in the Cloud and Pillar of Fire before the children of Israel in Exodus 13, as the Rock which followed the Israelites in Romans 10, as the Finger of God giving the Law in Exodus 19 and 20, and as the King of Glory in Isaiah 6, as the Angel of the Lord throughout the Old Testament, just to take a few examples.

But in all of these, although Christ the Word is truly revealed and manifested to His people, He appears only in types, figures, images and symbolic apparitions, the shadow of good things to come. Yes, Jesus is throughout the Old Testament, for the Old Testament is ultimately about, and authored by, Jesus Christ, the Word. He is the Lawgiver, the Lord of the Covenants, the Inspiration of the Prophets, the Visionary showing forth the age of salvation. He is the true Ark of the Covenant, the authentic Manna from heaven, the genuine Rod of Aaron, the sure Mercies of David, the Wisdom of Solomon, the One whose Glory appears in the Tabernacle and the Temple. Saint Augustine of Hippo instructs us that the Israelites were proto-Christians who fed on Our Lord in mystical communion, a foretaste of the Eucharist, because they had the supernatural virtue of faith in Christ before His Incarnation. Christ was in the faithful of Old Covenant leading them to the fullness of revelation.

In truth, we have no authoritative basis in Scripture on which to assert the theological premiss that Our Lord, because of His divine consubstantiality with the Father and the deification of His human nature in the Incarnation and Resurrection, actually appeared to the Israelites or others in the period before the Incarnation in His actual human nature. The Fathers of the Church, such as Saint Athanasius, Saint Chrysostom and Saint Gregory Nanzianzus, revel in the mystery of the Old Testament appearances of the Logos, but they never claim He was present there in His human nature born of Mary. For them, locating the historical moment, event and reality of the Incarnation in time and space is all -important, for the Incarnation is God's in-breaking into the created order. God forever becomes Immanuel in the precise moment of the Incarnation.

This raises an absolutely vital point of orthodox Christology: the communcatio idiomatum, the 'communication of idioms' or 'sharing of properties' in the Hypostatic Union of Our Lord''s Person. According to the Council of Chalcedon, in the One Person of Christ, the human nature shares the attributes and properties of divine nature while the divine nature undergoes a true participation in human nature - and this happens with no confusion, fusion, separation or change in the two natures of Christ. Therefore, Christ's human nature was deified or divinised, transformed to partake of the life of the Godhead and to share in the glory, perfection and immortality of the Divine Word. Christ's flesh becomes divine, inhabited by the fullness of God, 'in-Godded.' So just as God truly lived, suffered, was crucified, died and rose again, so in Christ Man lives and reigns with the Father and the Holy Ghost in the glory of heaven and forever participates in the communion of the Holy Trinity.
at October 24, 2009