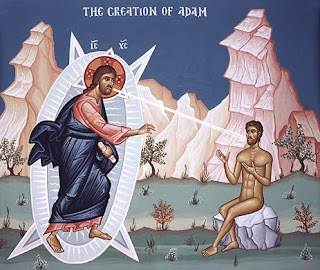 Our Redemption is achieved in Our Lord Jesus Christ because in the Incarnation, the Second Person of the Blessed Trinity, God the Son, God the Word, the only-begotten Son of God, assumed true and integral human nature of the Blessed Virgin Mary and was made true Man. 'Only that which God assumes does He redeem.' If Our Lord had not assumed a true human nature identical to our own and taken upon Himself true human flesh and spirit, He could not have saved us or redeemed us, for what He came to heal, restore, repair, divinise and transform was our own very nature, the reality of our humanity. Had He not become true Man in every aspect and way, sin being the sole exception, He could not have united the substance of our humanity to the substance of His divinity and thus raise our human nature into perfect communion with God.

Thus Christ took upon Himself a true, created, physical, material and natural humanity. 'God became Man so that man may become God.' In the Incarnation, Our Lord fully restores the Image and Likeness of God in man, which had been marred and injured by Adam's transgression; through Christ's human nature in the Church and Sacraments, we receive Him - and thus our own human natures, united to His in the Mystical Body of the Church through Baptism and in the Sacramental Body in the Eucharist, are replenished and nourished with divine life through the Holy Ghost. In this mysterious gift, we are enabled both to grow in holiness, virtue and love and to allow the Likeness to God to be entirely recreated in us personally. Our human members become the members of Christ the Man in His Body, of which He is the Head.

At the Annunciation, the miraculous and virginal Conception of Our Lord, the Logos or Word recreated human nature in the womb of the Blessed Mother by the Holy Ghost and assumed from Mary a perfect, sinless, immaculate and complete human nature, a human body, mind, spirit and soul. God put on flesh and took human nature into the Godhead by His hypostatic union: in the One Divine Person of God the Son exists from the instant of the Annunciation and forever two perfect, distinct and united natures, divine and human. The human nature assumed by Christ was created directly by Him in the body of Mary without human intervention or seed, no human father, so that the humanity of Our Lord is the New Creation. Our Lord is called the New Adam, the Second Adam and Lord from heaven (I Corinthians 15) because God the Son became truly human and united perfectly with His divine nature a completely renovated and restored human nature.

Our Lord's human nature was not pre-existent, but fashioned by God in the mystery of the Incarnation. By the overshadowing of the Holy Ghost, Our Lady conceived a human nature to which Our Lord was inseparably and instantly united and one which is identical to our own. In this union, Our Lord's divine nature was not changed and our human nature in Him was made whole and returned to its original state.

Notice the Church teaches that Our Lord assumed human nature, an 'impersonal' human existence composite of body and soul like our own, but not a human person. This is because Our Lord Jesus Christ is not a God-possessed man, a human personality in which the Logos dwells as in a temple. Our Lord is not merely a saint or God-inhabited human person, but is God made flesh, God made Man. The one and only Person of Our Lord Jesus Christ is the Divine Word, the Eternal Son of God, not a human person united to a Divine Person. The belief that Jesus of Nazareth is a distinct human person indwelt by another distinct person, the Divine Logos, is the heresy attributed to Nestorius of Constantinople and condemned by Saint Cyril of Alexandria and the Third Ecumenical Council of Ephesus in AD 431. Nestorianism professes there are two persons in Our Lord joined in a moral union: Jesus the man and Christ the Divine Word. Nestorians often use the heretical phrase 'two persons in one personality' to describe a Word-Man Christology at odds with the Gospel and the Catholic Faith. Jesus is not two persons in one organism, but One Person with two natures, of one nature with the Father in His Deity and of one nature with us in His humanity.

The divine and human natures are united in the One Person of Our Lord without 'confusion, change, division or separation.'

The Orthodox teaching is that Our Lord is One Person in two natures, human and divine, as taught by the Fourth Ecumenical Council of Chalcedon AD 451. There is one 'Who' (the Word) and two 'Whats' (divine and human natures) in the Person of Our Blessed Saviour. Monophysitism, condemned by Chalcedon, teaches the opposite error of Nestorianism, to wit, that Our Lord has only one nature which is divine. The term Monophysite means 'one nature' (mono phusis). Monophysites hold that Christ's human nature was absorbed by his divine, as the heresiarch Eutyches proclaimed, 'like a drop of water in the ocean'. This heterodox doctrine denies the true humanity of Our Lord as Nestorianism denies the true divinity of the Incarnate Logos.

Thus the womb of Our Lady is the new Garden of Eden, Paradise, and Our Lord is the New Adam, whose human nature is the recreation of human nature free of original and actual sin, untainted by corruption and free from mortality, concupiscence and the consequences of the Fall of man. Christ the New Man, sinless and Virgin-born, possesses a human nature, not of Adam's line, but of His own, given to Him by the Holy Ghost through the Mother of God. The Blessed Virgin Mary is one through whom the human race has been offered the gift of a regenerated human nature liberated from sin, for from her Christ's new human nature presents us with the total renewal of human life, like that of Adam before the Fall, yes, but even higher.

For in Christ, the substance of our mortal flesh has been deified and united to the Godhead in perfect communion and union. Our Lord raises human nature to a level never experienced by or realised in Adam, for in Christ, our human nature is shared by 'One of the Holy Trinity' and thus is inserted into the perichoresis, the mutual indwelling and communal life and love, of the Holy Trinity. Christ our God takes from us our humanity, with its loss of original justice and grace, and communion with God, and likeness to God, and gives us His humanity, effused with the fullness of divinity, in return - a divine exchange of love and grace. This human nature of Christ, the substance of our own humanity freed from sin, glorified by divine life, and full of the Holy Ghost, is communicated and applied to us in the Sacraments.

The Docetists and other early quasi-Christian Gnostics held Our Lord was but a phantom, an apparition, a heavenly being devoid of material flesh and blood who only appeared (dokeo) to be human, but did not possess a truly material physical human nature. Several early Gnostic heretical movements asserted Christ was truly divine but that He lacked a true and consubstantial human nature with us: such error vitiates the purpose and reality of the Incarnation. The Orthodox Catholic Faith maintains that Christ is consubstantial with us concerning His Manhood and consubstantial with the Father concerning His Deity (Athanasian Creed). Jesus Christ is like us, therefore, in every way. He is Very God and Very Man. In Him, both natures exist distinctly, without fusion, mixture and confusion, and yet are inseparable and interpenetrate each other. As the ancient Fathers describe the mystery, the Son's divine nature divinises His human nature 'like iron in the fire.' The iron and the fire remain distinct from each other, but each takes on the property of the other. Truly we can say therefore that God was born, performed miracles, hungered, thirsted, suffered, was crucified, died, was buried and rose again. And the humanity of that God-Man is now divine, resplendent with the glory and life of God.
at October 16, 2009

A friend of mine has sent me links to your blog before, but I'd failed to make an effort to regularly follow it. He sent me this post and I'm fixing that now.